Surf instrumental music, as an art form, was established in the early 1960s by bands such as Dick Dale & His Del-Tones, The Chantays, and The Surfaris. That reverbed, guitar-driven instrumental sound blasted out of Southern California over 50 years ago; today, it’s embraced and practiced by hundreds of bands in this country and around the world.

Every summer for the last 10 years, the Surf Guitar 101 Convention has attracted a great many fans to Southern California for a three-day feast of surf music. The event includes dozens of vendors selling CDs, t-shirts, and all sorts of swag related to surf music. The event not only celebrates the music, it also brings together many of those who habit the social networking website, www.surfguitar101.com (after which the Convention was named). It’s a time to renew old friendships and make new ones.

The big draw each year, however, are the many surf instrumental bands invited from all over the country AND the world to perform. The 2017 event featured some of the best surf bands from Southern California that included Outerwave, The Volcanics, The Tequila Worms, Par Avion, and The Insect Surfers (originally formed in 1979, this group is recognized as the longest running modern surf instrumental band). The rest of the country was represented by The Mystery Men (from Georgia), The Atomic Mosquitos (from Washington D.C.), The Exotics (from Wisconsin), and The Madeira (from Indiana).

Since this music has become truly universal, the 2017 Surf Guitar 101 Convention also featured The Kilaueas and The El Caminos. These two bands, from Germany and Japan, respectively, prove that surf instrumental music is not only loved and accepted on the other side of the planet, but the reverence that exists for the music’s traditional sound and style transcends language and cultural barriers.

In 2017, the event attracted the attention of three-time Grammy Award winning producer and engineer Mark Linett, who recorded Friday and Saturday night’s shows, and mixed and produced the tracks. Those performances are represented on the new compilation CD from Entrée Records, “Reverb Nation: Live at the 2017 Surf Guitar 101 Convention.”

The worldwide release date for this CD is 7 August. However, copies will be available at a special price for this year's SG101 Convention on 4 August.

Announcing the release of the Madeira's "Center of the Surf" CD

We are extremely excited to announce the release of "Center of the Surf" (Double Crown Records), the Madeira's second live album, this one recorded at the 10th Surf Guitar 101 Convention at the Alpine Village in Torrance, CA on August 5th, 2017. It was recorded and mixed by Mark Linett, triple-Grammy-winning producer and audio engineer who has worked with a long list of legendary artists, among them the Beach Boys, Brian Wilson, Frank Zappa, Red Hot Chili Peppers, Paul Simon, Los Lobos, Jane's Addiction, and Los Straitjackets. (See here for the full accounting of his many accomplishments). The tracklist is focused on the songs from our most recent studio album, "Ancient Winds", and we were also joined for the final three tracks of the set by John Blair on second rhythm guitar, as well as Jonpaul Balak on second bass guitar, making for an epic six-person line-up and a sound that can only be described as extraordinary in its scope! The cover and the CD package were designed by Stephen Blickenstaff, the well-known artist behind dozens of album covers (and many other artistic endeavors - as well as the theremin player in Atomic Mosquitos!), including most famously "Bad Music for Bad People" by the Cramps. 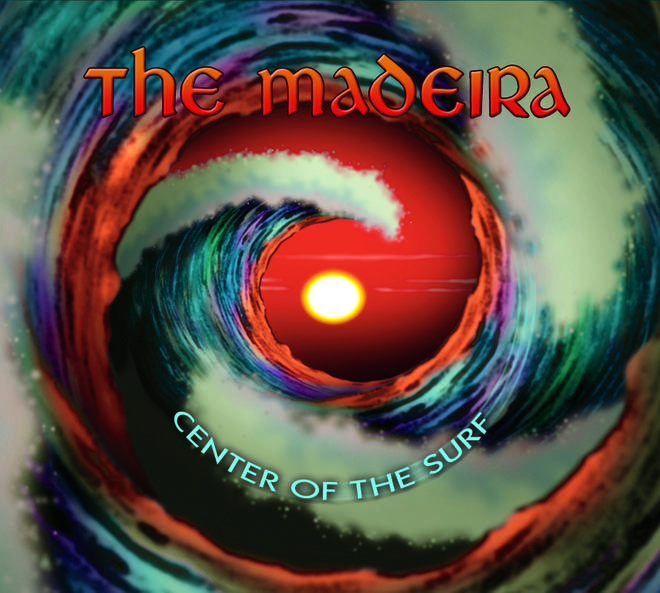 The CD will be available for mail-order from Double Crown Records on April 24th, but we will have it available at our two CD-release shows next weekend, at Melody Inn in Indianapolis on Friday, 4/20, and the Player's Pub in Bloomington, IN on Saturday, 4/21 (as well as Southgate Revival in Cincinnati on Saturday, 5/5). We hope you can join us for these all-surf shows - see more details here and here.

Finally, we're also thrilled to announce that the compilation album of the 2017 Surf Guitar 101 Convention will be released by Sierra Records in July, and it will include two exclusive tracks by us, recorded at the convention but only available on this compilation. All the tracks on the compilation were again recorded and mixed by Mark Linett. Stay tuned for more info about this exciting release.

We hope you pick up and enjoy "Center of the Surf" and that we see you at one of our many upcoming shows in the next six months, whether in Indiana, Ohio, and Michigan, or Florida and New Jersey!

(Check out this brand new video, once again ably edited by Patrick, accompanying the live version of "Leviathan" from the "Center of the Surf" CD: https://youtu.be/UfOm_3UBKCw )