Submitted by mulletmonster on November 28, 2015

Documentary recorded during the tour of the THE BAMBI MOLESTERS by Brazil in Jan/2015.

One of the most important surf rocks bands of the present day did 8 shows in 11 days and recorded some Tv Shows in the bigger country of South America.

In the documentary it is possible know the band history, see the guys on the road and a little piece of different gigs in Brasil in cities like São Paulo, Piracicaba and Ilha Comprida.

Submitted by mulletmonster on April 13, 2015

The Bambi Molesters full show in São Paulo/Brasil in Jan/19/2015.

Submitted by mulletmonster on March 01, 2015

Submitted by mulletmonster on December 20, 2014 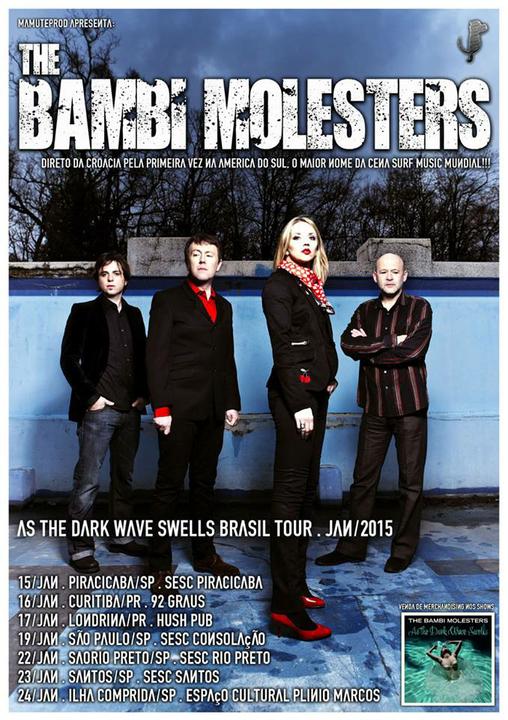 Thanks to dp for tipping us off to this nearly 30 minute video of the Bambi Molesters. Check out the forum thread for an English translation graciously provided by Ivan.

On Saturday September 14th the third installment will take place of the North Sea Surf Festival, the first festival in The Netherlands dedicated to instrumental surf music. The festival will be held at the legendary venue De Melkweg in the heart of Amsterdam. The festival will feature 8 bands and this year proudly presents Bambi Molesters and Los Coronas as part of the line up, two of the most popular European surf bands. Besides live shows there will be classic surf movies at the Melkweg Cinema and a record store with collectable surf vinyl and cd’s.

The pre-sale for the festival will start coming Saturday and the first four bands to attend the festival have just been made public. Bambi Molesters from Croatia and Los Coronas from Spain will be playing The Netherlands for the very first time. From Belgium Pirato Ketchup will be playing the festival and the upcoming Amsterdam band Bevel Emboss will be there following impressive radio airplay around the world. In the coming months the other bands will be made public as well as the program for the cinema.

THE BAMBI MOLESTERS - A NIGHT IN ZAGREB DVD + HD DOWNLOAD

Submitted by SLOWBOATFILMS on April 16, 2012

THE BAMBI MOLESTERS - A NIGHT IN ZAGREB is now out on DVD (incl. a double CD!) & as a HD DOWNLOAD!