Waka Jawaka is an interesting band. It definitely has the signature surf sound, but this isn’t tribal surf or even the surf music that makes you think of catching a wave in southern California. Rather, this band’s sound is surf infused with a lounge/exotica sort of sound. There is also a little rockabilly, particularly in the song “Salon Kitty,” which is a surf-lounge-rockabilly hybrid. I can say one thing for sure. I haven’t heard many songs that would fall into that category. This band throws another twist into the mix with “Fly Me to the Jaws.” This one has a guitar solo that sounds straight out of the 70s.

This band has a really clean sound. If they hit any off notes on this album, I sure didn’t pick them up. While some surf music is perfect for a night with a bonfire on the beach, this is really more suited to a dark bar lit with tiki torches while you sip on rum drinks (umbrella optional). If you ever found yourself in such a place and this band was playing, I have no doubt you would enjoy yourself thoroughly.

The new 20 song CD release "Wild Surf Guitars" by the Insanitizers received awards from two CD review publications and top ratings from a third within the past month.

This is the conclusion of the review:     If this was a throwback sixties beach film, and this band was the movies heroes, it’d wrap up like this: “The Insanitizers win this heat and take the tournament! The Insanitizers are new Kings of Wild Surf Guitars!”
Yeah; it’s like that.

"Cry of the Coyote" rock-n-roll CD review magazine published in France gave this CD the "Cry of the Heart" award with top ratings. They wrote, "this CD lives up to its title." 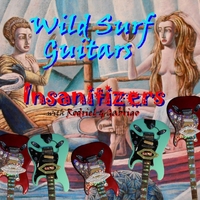 Microsoft does it, Apple does it, and now the Insanitizers have issued a revised version of their surf guitar CD "Whimsical Surf." Why revise? Because the Insanitizers found how to make their guitars sound both energetically edgy and gorgeous. Here is the first professional review of this new CD:

"Conrad Swartz's band decided to revisit the content of their previous album, while I await their next CD. This gives me the chance to appreciate the humor of such titles as "Polkzart" (the 40th symphony of Wolfgang Amadeus as a  super fun polka), "Fantwango" (a rocking tango), and "Fowl ball" or "Beerocracy" (puns on "foul ball" and "bureaucracy"). I rediscovered versions of "Sugarplum" ("Dance of the Sugarplum Fairy" by Tchaikovsky) which rocks well and of "Puppetor" ("Funeral March of a Marionette" by Gounod) in flamenco rock style. They added supplementary guitars, changed the solos on some songs, and concocted new arrangements and new melodies on others. I was thrilled by the first version, but the second is even more rockin’ and the guitars gallop. Everything on this album is a keeper, what a great time for fans of rockin' surf!"

The BBs had a hit with Kokomo in 1988 and they represented the USA when foreign troops (America, France, Russia, Great Britain) left the city of Berlin after the reunification of our country.

The band toured regularly our country, but this time it was different.

What was suprising to me was the articles afterwards, which were written by someone who knows the history of the BBs.

The hassle of Brian and Mike about Smile, the never ending "No. 1 Surfing group in the country" image, the "better" productions like "Some Music To Your Day" from the early 70s, lots of old stuff but none hits like Our Cra Club (flipside of fun, fun,fun however) and so on and so forth.

The death of Dennis (drowning accident-not mentioniong his drinking and drug abuse) and of Carl (lung cancer after smoking too much in his life) were mentioned.

I remember concerts when Feel Flows, The Trader had been highlights sung by Carl,

Cool Cool Water and other  sophisticated songs were done without Brian, even the disco version of "Here Comes the Night" was done perfectly live.

The concerts with 50 songs had all what you needed, so an encore wasn´ t necessary.

Brian seemed to be nailed to his chair at the piano - how long will he live??

Once someone in the audience in New York asked "Where is Brian"?

Mike answered: "Brian is in the songs!" How true this is.

Party talk some 10 years ago: "The best concert I ever saw was that of the Beach Boys!" I asked "when was that?"

I hope a fine dvd will be released later this year to witness the best of 50 years!

New Gandy Dancer - Issue 97: "All originals little album Stateside . . . and this is the sound we like! Crystal clear, sixties style playing on stuff we haven't heard before. Bit of Ventures, bit of surf but in a flow of their own. Well performed and written (did I say all originals?), the best track of which is "Link Man" a rousing 12 bar delivered with panache. **** (Davy) 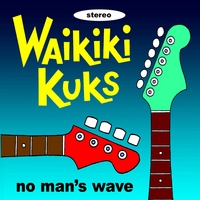 Unfortunately I found this CD only last week though it was already released 2009: The Waikiki Kuks from Finland with No Man's Wave.

This album contains 15 stunning reverb drenched instrumentals, vintage surf covers, as well as original compositions by members of the band. One track is as good or even better as the others. You can preview the tracks and purchase the album at CD Baby. A MUST for every fan!!

I’ll try to keep this brief…Put the top down, set the cruise control & hit the open road with Mister Neutron’s newest CD - Nor’easter. Here are my favorite picks and my thoughts on the latest Mister Neutron arrival…

Nor’easter opens with an acoustic duet by Damien Fanelli and guest Mike Caro performing The Big Island. This is an amazingly beautiful piece that shows off the depth of creativity of the composer. Thank you for breaking out of the Jersey barriers that so many seem to want to put around surf bands today.  I could definitely get used to this new type of composition from Damien. Mike Caro also makes an appearance on Vlad The Impaler adding an eerie sounding organ to the surf cocktail.

The disc begins with the rambunctious 6G15: yes, finally, a surf tune dedicated to Leo Fender's legendary stand-alone reverberation circuit design designation number. 6G15 has a unique and memorably discordant melody line (you'll know the note I'm talking about when you hear it!) followed by some killer DickDale-ness and ultimately ends with a crashing  kick straight to the unit! Excellent drums by Alexis B. throughout this tune.

I'll confess, when I first heard it, i didn't think I would really like this album. I don't know, it just seemed so . . . "different". But then after giving it a few more listens, I realized that the inventive melodies and irresistable hooks had already begun working their way into my subconscious. Unexpectedly, through the day a tune might pop into my head and be playing in the back of my mind. You know the feeling? I'd think, "now where have I heard that? . . . some classic 60's song I've heard a million times?---No, wait . . . it's from the 'Verb album!".

That's when I knew I was in trouble. Almost without exception, the albums I now find I can't live without have affected me this way, and The 'Verb's "Reverberated For your Pleasure" is now in that catagory.

This album is almost epic in its scope, and ambitiously conceived. These are finely crafted pop compositions that almost masquerade as 'surf' tunes. To be sure, many do fall very solidly into that genre. Fans of dripping reverb, glissando and surf beats (and aren't we all?) will have plenty here. But there is also so much more going on. The sheer volume of melodic content is astonishing. The 'Verb apparently have ideas to burn and seem to lavish them more generously on a single song than some bands do on an entire album. Often I get the impression that these are instrumental versions of songs that originally had lyrics. To listen to this album from beginning to end is to be taken on a "musical journey" (if you'll pardon the cliche) through a mini history of modern instro/pop music. Yet while I think I can detect influences, they are so filtered through The 'Verb's unique approach that they are transformed into something new. Here are some song by song impressions:

Well this time I will be reviewing an album I like a lot by one of my favorite bands. First off Twin Tones is a band from México City, D.F., Nación Apache is their first album but there's also another one available titled Salón Chihuahua.  I bought this album about a year ago at one of their shows. It's got 12 themes and every single one of them is absolutely worth it. It's one of those albums that don't have any weak spots. Their style is a very interesting mix of Classic Instrumental Surf, Spaghetti Western, Country, Polka and Norteñas. You can hear very clean guitar tones with lots of twang(I know a lot of you hate the term "twang" but it's there and it sounds great). They included samples of old Western movie dialogues, which is a really important part of the  album's whole Western atmosphere. They invited several guest musicians to play various instruments for the recording of this album which include: accordion, trumpet, a violin and other interesting things. Although I like the whole album my favorite themes are "Bandidos", "Nación Apache", "A 10 Pasos de la Muerte" "El Mexicano"(this one has a really cool organ on it) and "Doroteo Arango" which is very Tex-Mex.

Check out this great band, you won't regret it.

You can reach the band at www.myspace.com/twintones or you can visit their website at www.twintones.com.mx