Our (13th) such gathering of 'stalwart' Ventures fans The World Over will be held SATURDAY OCTOBER 8TH from 9 AM-9 PM.

The theme for this year's event is: TOGETHER IN HEAVEN as we pay tribute to co-founder rhythm guitarist DON WILSON! On hand as special guests will be members of The Wilson & Bogle Families, Ventures business manager Fiona Taylor & Bob Shade of Hallmark Guitars. There's also a good chance a couple current Ventures band members join in the festivities!

For those comin' from afar- hotel accomodations have been set up at the BRADYWINE PLAZA HOTEL in Claymont, Delaware!

If you're unable to attend- please consider 'support' in some form whether purchasing a 'comemorative' T-shirt, program &/or post DVD SET. More details & questions answered by direct e-mail: TABALT11@YAHOO.COM!

I like to say this often- "It only takes attending (1) Ventures fan fest to get hooked for many more!" 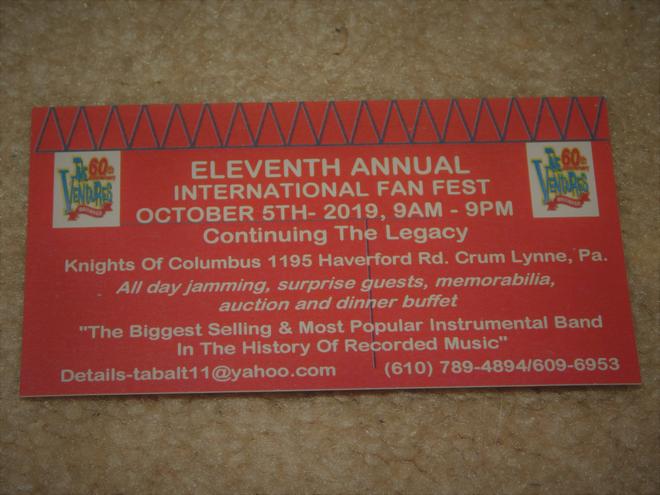 Our event this years marks THE VENTURES 60TH ANNIVERSARY, though our regular jammers plan to get a DICK DALE TRIBUTE into the mix.

The cover charge for the (12) hour gathering remains at $60 & includes breakfast, lunch & dinner. Memorabilia tables will be set up & merchandise available for sale. Lastly, there's a chance you'll be able to rub elbows with one or more band members!

Long-Awaited Documentary about The Ventures to be Crowd Funded 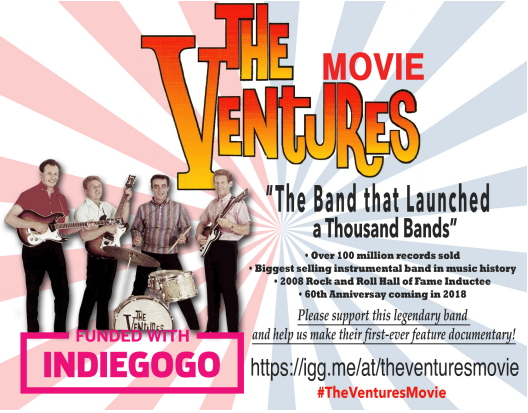 CHARLOTTE, NC – Wilson Ventures LLC has entered into a producer partnership with Charlotte-based Studio South Holdings to produce a documentary about The Ventures, the best-selling instrumental band of all time. To fund the first-ever film, an IndieGoGo account - www.igg.me/at/theventuresmovie - launched this week.

The standard-length documentary will chronicle the “band that launched a thousand bands” that was formed in 1958 by guitarists Don Wilson and Bob Bogle in Tacoma, Washington. With band members Mel Taylor and Nokie Edwards, the band released Walk Don't Run in 1960, the first of over two hundred albums. Staci Layne Wilson, Don Wilson’s daughter, says the documentary’s world premiere will coincide with the band’s 60th anniversary next year. “I am so proud and excited to be making a documentary film about The Ventures with the best team ever: my dad, siblings Tim and Jill and Studio South.” According to Staci, drawing on the fan base will be critical to the film’s success. “We are out to make the most celebratory and comprehensive documentary we can and are calling on Ventures fans from all over the world to help us spread the word.”

It was the band’s unique sound, largely from experimentation with guitar effects, that not only earned them the moniker “The Band that Launched a Thousand Bands,” but influenced such music greats as Peter Frampton, Elton John, George Harrison, Stephen Stills, Gene Simmons, Keith Moon, Alan White, Joe Perry, Roger Glover, John Fogerty and Joe Walsh.

About the documentary, co-founder Don Wilson, says, "There is so much that people still don't know about The Ventures. From the time my partner Bob Bogle and I started with two pawn shop guitars in 1958 to having the No. 2 single in the country with Walk, Don't Run in 1960, being inducted into the Rock and Roll Hall of Fame in 2008 to right now -- the story has ups and downs, disappointments, and wow! moments, that we want to share. You're going to love it."

Don’s son Tim, who will co-produce the film, says he "could not be more proud to be a part of this instrumental (no pun intended) story of The Ventures and to share the biography movie so the world can see the great depth of The Ventures' career in all its glory.” Mike Bogle, the son of the Bob Bogle, who died in 2009, says “The Ventures documentary is long overdue and I look forward to watching it.”

Their original tune, Surf Rider, was in Quentin Tarantino’s Pulp Fiction soundtrack. Singles that made the charts include Hawaii Five-O, The 2,000 Pound Bee, Wipe Out and Walk, Don’t Run.

In 2008, the Ventures were inducted into the Rock and Roll Hall of Fame.

Studio South Holdings CEO Bert Hesse, whose production credits include In the Footsteps of Elie Wiesel, Cold Storage and Night Feeders, says the goal is to allow The Ventures’ wide and deep fan base the opportunity to participate in the long overdue documentary. “We encourage fans and musicians who were influenced by their music to go to https://www.igg.me/at/theventuresmovie.”

Submitted by manuventura on January 27, 2016

Here it is !! For the first time in France !! A tribute band of THE VENTURES !!!

As mentioned previously in this story, the Indiegogo campaign to fund the first V2 album is now underway. Please check out the campaign by clicking the image below:

Members of The Ventures launch V2!

Submitted by LukeGriffin on February 16, 2015

Instrumental band V2—featuring members of The Ventures, Bob Spalding and Leon Taylor—is kicking off a crowdfunding campaign on Indiegogo on February 23rd to raise funds towards producing a debut album and  to introduce itself to a worldwide fan base.

The album will feature a balanced mix of classic instrumentals as well as new compositions. Featured guest artists on the album will include Eric Johnson (Out Of Limits, Pipeline), Adrian Belew (Telstar), and George Tomsco (Bulldog).

Tracking for the album will begin in May 2015 under the direction of Grammy-nominated producer, Chris “Frenchie” Smith.

Perk offerings at various levels will include: Limited vinyl release; V2 limited edition Couch guitar strap (created only for the campaign and for featured musical guests); concert tickets; signed and numbered color print; private guitar lesson with Bob Spalding. There will also be limited perks such as picking a classic instrumental for V2 to record for the crowdfunded edition on the album (limit 3) and an Executive Producer credit (limit 4).

The campaign will run for 4 weeks and will be tracked as #VivaV2.

V2 is an instrumental rock band launched in 2014 by Bob Spalding and Leon Taylor, members of the iconic band, The Ventures. V2 is dedicated to preserving and advancing the “art” of the rock instrumental by performing high-energy concerts and releasing the best possible recordings.

The Ventures As Played By V2 with The Del-Vipers & King Pelican!

Submitted by ErnestHernandez on June 24, 2014

Ventures legends Bob Spalding and Leon Taylor are fronting "V2" and performing all of your favorite Ventures' tunes! The Del-Vipers, (Austin, TX) and King Pelican (San Antonio, TX) are on the bill to things revved-up for V2! 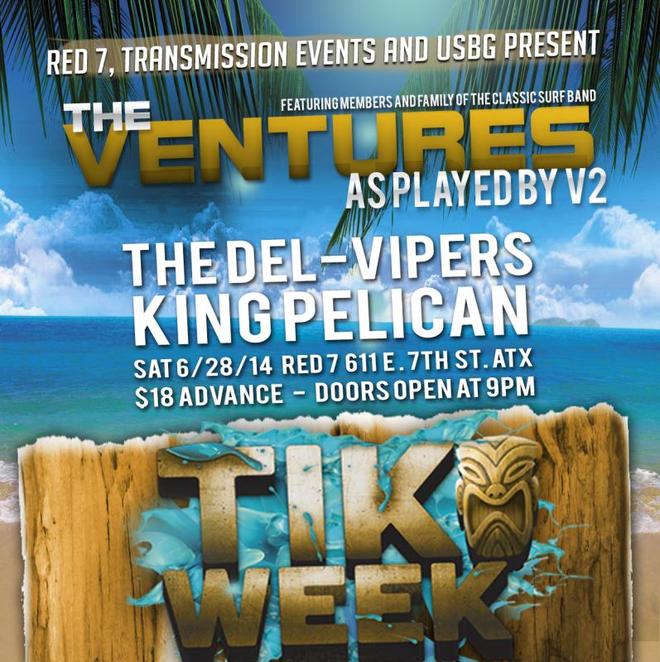 Finally after a loooong break we're back with a brand spankin' new surf music podcast. This episode features songs from albums that have been released in this year 2011. It's been a stellar year for surf music releases as this podcast will prove. There have been so many albums released that we're going to finish the list with the next podcast. Also on this episode is an interview with Don Wilson and Bob Spalding of The Ventures. This interview was conducted earlier this year by Rich Derksen aka Pappa Surf - Thanks Rich!