These days, just about everyone is familiar with the twangy, reverb-drenched plunk, undulating whammy bar and machine-gun staccato commonly known as “Surf Guitar.” It’s become one of the staple sounds chosen to set the mood for commercials, television programs and feature films by music supervisors and sound designers the world over. Whether it’s conjuring the feelings of Summer, the beach, the old West, outer space, a desolate desert, or the adventures and intrigue of an international super spy, that quintessential “Surf Guitar” sound is somewhere in the background.

Lesser known, however, is the fact that there are legions of fanatics spanning the globe that share a deep passion and sometimes obsession for this 50-plus year old Southern California art form. These die-hard fans keep the genre and its associated culture very much alive and thriving through internet communication, annual meetings, specialty radio programs, and an ever-growing network of performers, collectors and instrument aficionados. Since 2006, the single most important internet resource for everything Surf guitar has been Surfguitar101.com, and for the past 6 years, its official annual convention has been the most important gathering in the United States for anyone interested in this very specific musical style.

2014’s 7th annual Surf Guitar 101 Convention is slated to be the greatest and most well-attended to date. Headlining this year is none other than local Southern California legends Slacktone (slacktone.com), the Surf trio considered by many to have set the bar for all modern Surf bands with their jaw-dropping display of technical proficiency, attention to tone and sheer power. Making their way down from Seattle for a very special reunion performance comes The Boss Martians (facebook.com/bossmartians), who exploded onto the scene in the early 90s with their traditional sound featuring organ. From Japan, for the first time in many years with another historic reunion performance is The Surf Coasters (surfcoasters.com), one of the most prolific of all Surf bands, releasing upwards of 25 recordings since their formation in 1994. Debuting their brand-new full-length album Wiki Waki Woooo comes The Kilaueas (facebook.com/thekilaueas), all the way from Germany, who have been thrilling audiences with their energetic live shows and impeccable vintage tones. Making their California debut is The Supertones from New York, one of the longest running modern Surf bands, a staple of the East Coast scene since 1988. Back to the convention from Northern California to wow audiences once again comes instrumental supergroup Frankie & The Poolboys (facebook.com/frankieandthepoolboys), whose latest album The Adventures of Cap’n Coconuts has been consistently high on international critics’ lists. Up from the San Diego area comes first-wave legend Tom Stanton leading his trio The Surf Kings, who’ll present their special brand of heavy, moody Surf. And last, but certainly not least comes the intensity of power Surf trio Threesome (threesomeband.com), fresh off of a European tour in support of their latest EP, On Tour. Live performances will also include an all-star tribute to first-wave pioneers The Atlantics of Australia, featuring members of The Madeira, The TomorrowMen and Insect Surfers, and a special showcase by one of the originators of Surf music, the creator of “Mr. Moto” himself, Paul Johnson.

And, true to the old saying that there’s something for everyone, thanks to the generosity of major sponsors such as Fender, D’Addario, Eastwood and others, attendees will not only have the opportunity to receive free products, but also enter raffles to win exceptional prizes such as actual Surf guitars! Up for grabs will be a Fender Classic Player Jaguar set up by Slacktone’s Dave Wronski, an Eastwood Sidejack DLX in greenburst, a custom Atomic Brain pedal by Nocturne, and a deluxe accessory package from D’Addario, among many other wonderful prizes!

Bring the kids, listen to the amazing live music, shop ‘till you drop and meet and greet some of Surf music’s most important personalities, all within steps of a full kitchen and bar, in the air-conditioned comfort of Los Alamitos’ Starting Gate. It’s reverb-drenched fun for the whole family! Tickets available at the door. 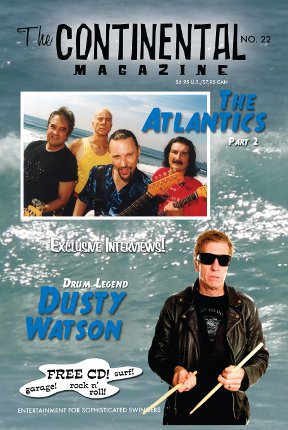