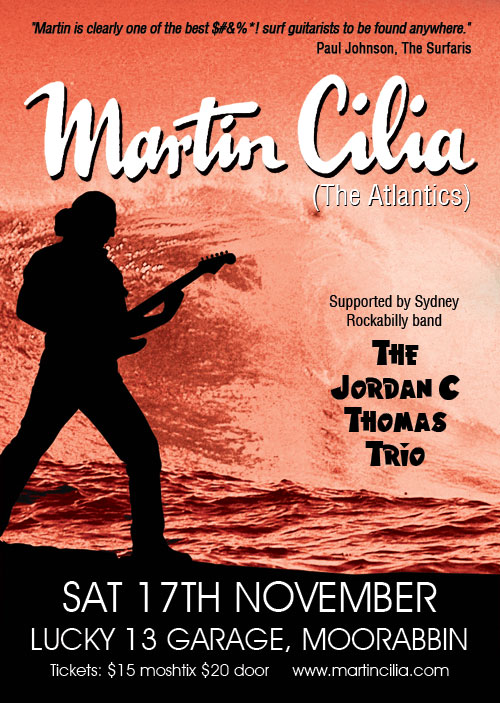 Martin Cilia is Australia's premier surf rock guitarist and also long time member of legendary Australian band, The Atlantics. He's taking the sounds of summer to Moorabbin for a touch of rockabilly surf.

He has taken a step into the solo spotlight with the release of three solo albums to date, the latest being "Surfersaurus". In live performance Martin and his band draw songs from the Atlantics repertoire, including the classic "Bombora" as well as classics such as Pipeline, Miserlou, Wipe Out, Walk Don't Run.

Jordan C Thomas is a singer/songwriter working in the styles of Jazz, Swing and Rockabilly with master skill and effortless cool. In this niche he is one of the country’s most sought after musicians - playing with such luminaries as Imelda May, Royal Crown Revue, Brian Setzer, Deke Dickerson, The Porkers, the Louisville Sluggers, Lee Rocker, and many more.

The Jordan C Thomas trio is an empowering statement against the pre-packaged ‘flash in the pan’ pop idols that clog the airwaves. The sound is passionately traditional and authentic, but it transcends eras, fads and fashions.  It’s something else. It's cool, it's old school and it's coming soon to a venue near you...