Surfapalooza II - 2011 kicks off Saturday, June 25that 6pm at the Whiskey in Annapolis, MD.

This year we’ve expanded the event to include 7 kickin’ surf bands on 2 stages! Joining us this year for the 1st time will Baltimore Surf Sensation the Diamondheads, also the Clams, Blue Wave Theory and Killer Filler!  Returning from last year are the Annapolis favorites the Atom Bumz, the Instronauts of Reverb Galaxy and the Hypersonics!    Plus once again everyone will be treated to the awesome Surfer Girl fashion show held by the great folks at The Brown Eyed Girl Surf Shop!  Third Eye Comics will be bringing their Marvel Comics Silver Surfer display and DJ Bump returns spinning a variety of surf/beach music between sets!

Lew of the Atom Bumz and Mike at the Whiskey are putting on a fantastic event this year, and we hope you can join us!  Cover is a mere $10. 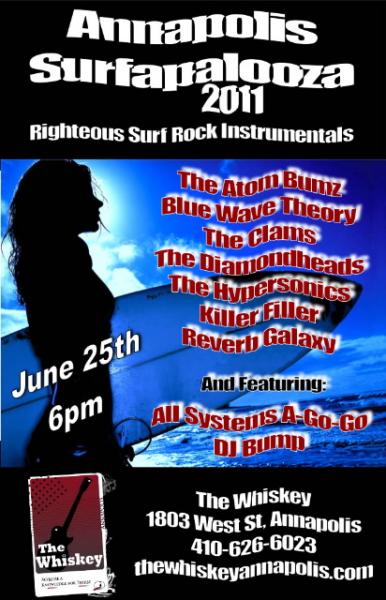 Surfapalooza 2011 is sponsored and supported by: