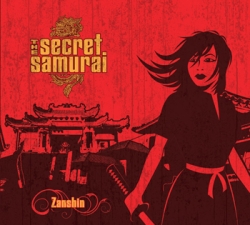 The Secret Samurai's sophmore CD has finally been released and is available now! The CD contains 13 tracks, 10 of which are original tunes. Zanshin has been a year in the making as we began work on the tracking in February 2010.

The CD is available now directly from our website:

and will be available soon at CD Baby, iTunes, Double Crown Records and other locations.

The CD was recorded, mixed, and produced by Dave Klein (Agent Orange, The Ghastly Ones, The Bomboras) at Multisonic Studios. Dave also contributed additional percussion and keyboards to many of the tracks. Mastering was done by Paul Abbot of Zen Mastering and layout/design was done by Kenneth Wessel.

I ordered mine - can't wait to hear it.

My copy is on the way!

Got mine today at the Victor Vector benefit show.
will listen tomorrow night.
can't wait. but too tired,
and ears too blown out from 7 hours of loud live music.