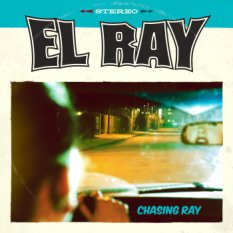 THE SOUNDTRACK OF YOUR WILDEST IMAGINATION

At the turn of the century, a strangely inspiring dude called Frank transformed four cute indie guys with a soft spot for love struck lyrics into dirty savvy surf instrumentalists where mums the words.  Nine years, three bass players and three albums later, El Ray now releases its fourth studio album 'Chasing Ray'.  Are you ready to be surfed away by the soundtrack to your wildest imagination finally being released?

A TRIBUTE TO EL KID'O

Drawing on inspiration from legendary Link Ray & Dick Dale, mixed with class acts like Pixies, Bob Hund & Sonic Youth and with a profound love for the garage scene, El Ray is more than music, it's deadly fun.  'Chasing Ray' is the band's tribute to former bass player extraordinaire, El Kid'o, who died tragically of cancer at the age of 27.  With new bass player La Chiquilla in place, El Ray is once again ready to get in character and play bikinis and trunks of every cool cat in town.  Ink or no ink, you're all welcome at El Ray's surf party and as the band says: 'As long as you're into surfing the genre with a twist and more than ready to venture into the night, you're a Ray'.
AWAKE YOUR PRIMAL INSTINCTS

Where others need lyrics, a PA system and a crowd, El Ray just needs two guitars, a bass, drums and a couple of amps to awaken your primal instincts.  With thirteen new tunes they are shaking the musical underground with their version of rock'n'roll.  Stripped down to the bone where riffs are wild, where tune is king and where rhythms will bang in tune with your reptile brain.  Let your imagination run free with El Twang, El Fuerte, La Chiquilla and El Firetone when they strike down with songs like Shhh!  Lay Low, Cherry Cheeks and Cheese on a Cup.