Submitted by bigtikidude on July 15, 2008.
Hey Everybody,

Just a heads up about the Surf Guitar 101 Convention. This will be at Suzy's bar and grill in Hermosa Beach, corner of Aviation and Prospect, between Artesia and PCH. Noon to 5 or 7 pm, separate night show is 8 pm to midnight but your are welcome to come at 11 am or so.

1st off its gonna be many things: a swap meet of surf music (cds, lp's, 45s, new/used), and instrument/gear, shirts, posters, hats, etc. If you have surf swag/merch to sell bring it, grab a free table and sell away.

Please save enough Money for the Night show, and their merch. They need money too, as some of them are coming from The Midwest and Nor. Cal.

Surf Jam: You play a surf standard along with a live backing band: Outterwave. See the forum thread for a complete list of songs and sign up!

Later that night at 8pm, more surf bands!
On Sun. Aug 3rd at the Huntington Beach Pier, 11 am to 5 pm will be.
There is also a San Diego show on Friday, August 1st with
If anybody would like to go down there to get an early start on the Reverb overdose weekend! 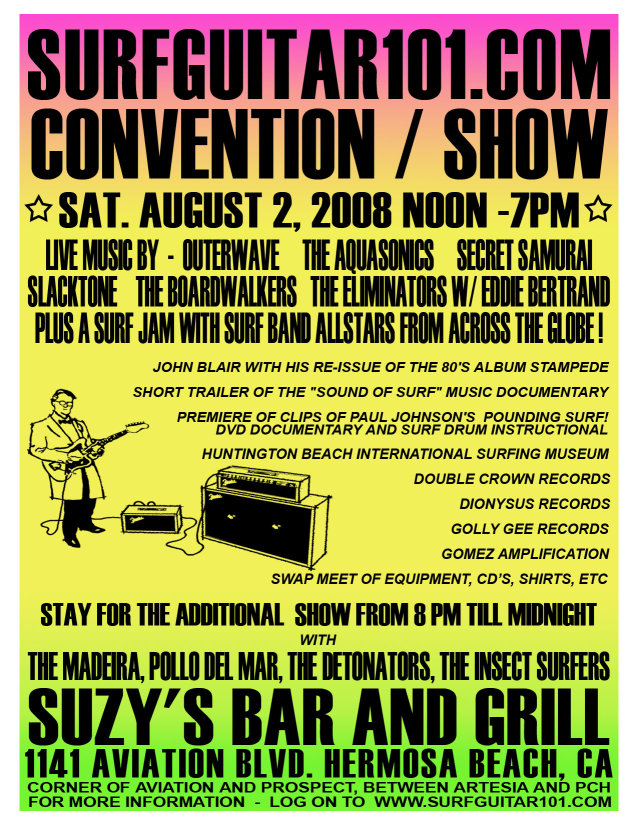 This is probably the single most important news story this site has ever run!

CONGRATS TO ALL WHO PUT THIS TOGETHER.

WHAT A POWERHOUSE WEEKEND THIS IS GONNA BE FOR THE SURF COMMUNITY!

Brian, Thanks so much for making my post look so

thanks to Ferenc and all the players of the Night show for letting me do this event, the same day.

Thanks to Outterwave for providing the amps and drums for the whole event.

Thanks to all the Vendors.

Thanks to everybody who does make it to this event.

Thanks To Brian for running this site.

and most of all.

Thanks to all of the Surf Musicians who are playing at/for this great show.

I hope it goes down in history.

if you need the address for Suzy's its

Jeff, thanks for putting this thing together. I remember when this idea was in its embryonic stage. Its so awesome to see it materialize into a prime time event. I can't wait to be a part of it!!!