We are pleased to announce that the 8th Annual SurfGuitar101 Convention will be taking place on Saturday, August 8th, 9am to 8pm, at the Garden Grove Elks Lodge in Garden Grove, California! Please note the venue change this year!

Once again we have assembled an amazing lineup and have continued our tradition of hosting international bands. This year we have the incredible King of Fuzz Guitar, Davie Allan, celebrating the 50th year of his musical career! We have two bands from Spain: The Longboards and Els A-phonics (who knocked them dead at the Surfer Joe Festival in June). Also on the bill are California legends The Eliminators, the young and brash traditionalists The Volcanics, and the new hotrod surf band Boss Fink (featuring members of The Ghastly Ones and the Huntington Cads). Hailing from Atlanta, Georgia we have the progressive instrumental band Moonbase. From a time and place unknown we have the sci-fi stylings of The TomorrowMen. And it wouldn’t be a true surf guitar convention without the legendary Paul “Mr. Moto” Johnson of the groundbreaking 60’s band The Belairs. Finally we have an all-star tribute to Jim Messina and The Jesters featuring John Blair (Jon & The Nightriders) and Ivan Pongracic (The Space Cossacks, The Madeira).

Also new this year will be a live broadcast and stream courtesy of KFJC and Cousin Mary! KFJC will be broadcasting on 89.7 FM in the Los Altos Hills area as well as streaming audio and video on the ‘net at kfjc.org!

Be sure to get there early for the SG101 members jam (see the links below to sign up).

Once again here is the lineup followed by the venue details:

Doors open at 9am, music begins at 10am and runs to 8pm. Cost is $30 at the door. The Elks Lodge is an all-ages, family friendly venue that will have food and beverage available all day!

In addition to the music we’ll have vendors selling surf music and surf related items. Check out these raffle items thanks to our generous sponsors:

As usual there will be plenty of amazing shows before and after the convention, including a convention after party and a Huntington Beach pier show the following day. 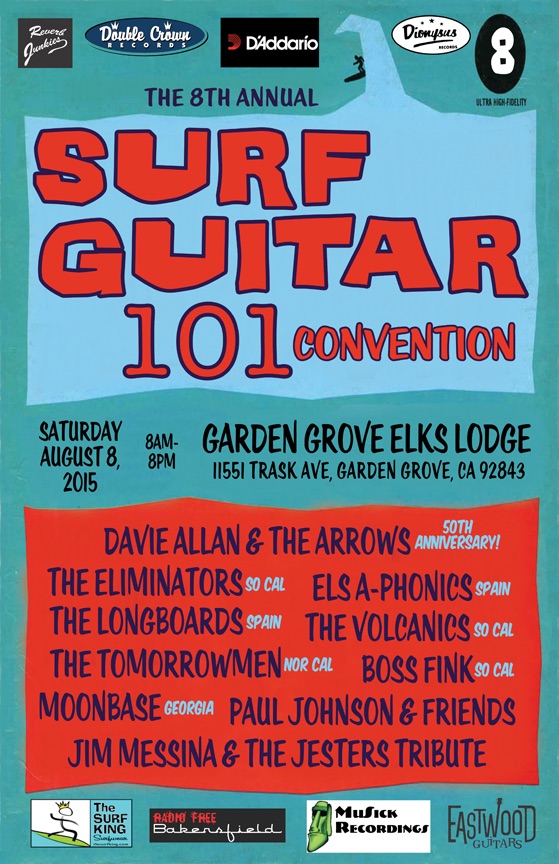 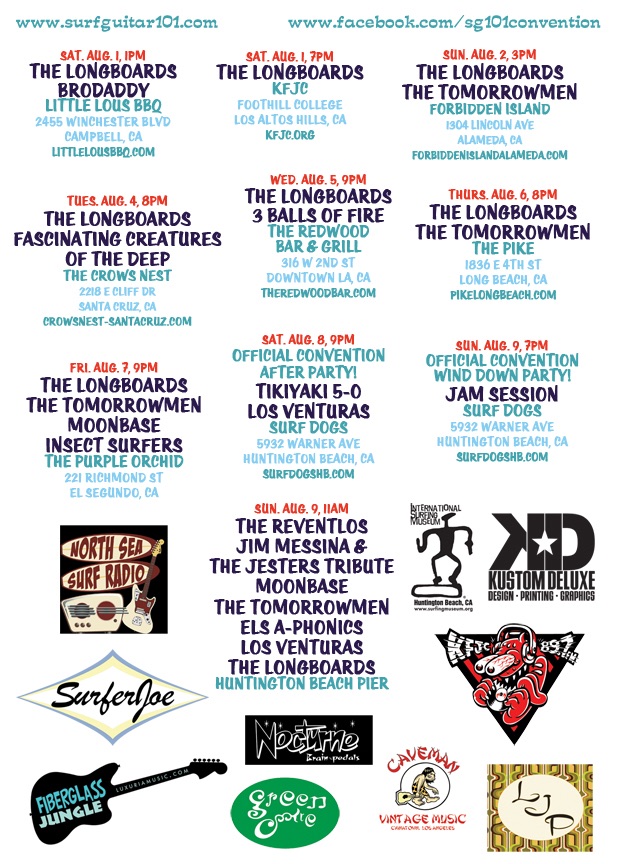 Wow! Fantastic line up! I can't wait! Wish I was going to be there this weekend instead of Next Thursday!