The Creature Preachers have joined the Bosphorus Cymbals family

Submitted by TheCreaturePreachers on November 02, 2022

The Creature Preachers are proud to officially announce that we’ve joined the Bosphorus Cymbals family!!! The pictures don’t do them justice. They look and sound amazing! You’ll be hearing them on all recordings and live performances from here on out. These babies were made to order and they even laser etched our logo onto them! We couldn’t be more excited to be a part of the family. 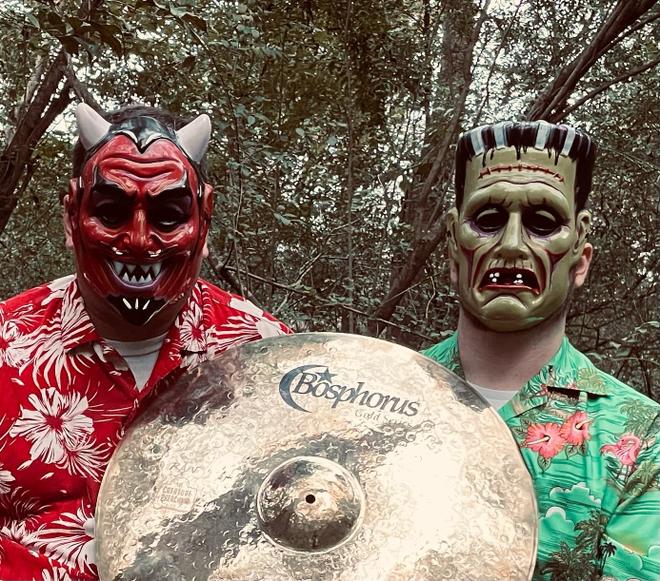 Hello surf guitar folks. I just saw this article in the Santa Cruz Sentinel and thought someone in here might be interested:

Police in Southern California had already arrested several suspected burglars in August, tying them to a July burglary of some $2 million in musical equipment and personal belongings from a storage unit in Marina Del Rey. Investigators later learned that some of the stolen guitars were being sold from Santa Cruz through the online site reverb.com, a legitimate online website.

Nine stolen vintage guitars were recovered from a Delaware Avenue warehouse and two associated residences, according to Lt. Arnold Vasquez. The guitars ranged in value from $5,000 to $50,000 each, with a combined recovery total of $225,000, according to Santa Cruz police. The Santa Cruz police have made no arrests in the local case, “as it remains unclear how the stolen property came into the possession of subjects associated to the searches,” according to Vasquez."

As veteran surf guitarists ourselves, Mel and I consider this pedal a must have for anyone using a Fender style reverb tank. Surfy bear kit builders, you can easily wire in a jack to accommodate the pedal as well, if you haven't already.

We will be setting up a demonstration area at the SG101 convention, but if you're not coming and you'd like to pre-order one at the discounted intro price, we've created a page on Mel's Alameda Guitars website with more information and a contact form at the bottom. 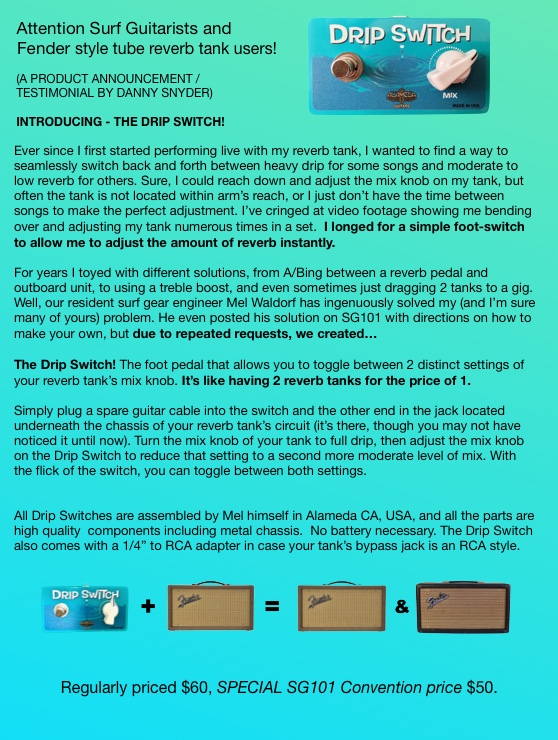 You can also find everything you need to make your own right here.

The May 2018 issue of Vintage Guitar magazine is featuring every surf player's favorite amp, the venerable Fender Showman 6G14-A. This particular example has apparently fallen into the hands of a collector and is all original. Wow!

Being a Showman 12", it features the separate, elaborately ported 12-inch JBL D-120-F "speaker Projector Ring" (tone-ring) "piggy-back high fidelity Lansing enclosure" cabinet, versus the Dick Dale-approved 15-inch JBL D-130-F speaker. Yet, for the devoted, it is a fascinating look both into an especially well-preserved specimen and at this model's place in history.

Lucky you! Vintage Guitar kindly makes some of their issues freely available on the Web, and possibly only for a limited time. It is available now via online distribution. Follow this link: The Show Must Go On: Fender's 1961 Showman by Dave Hunter 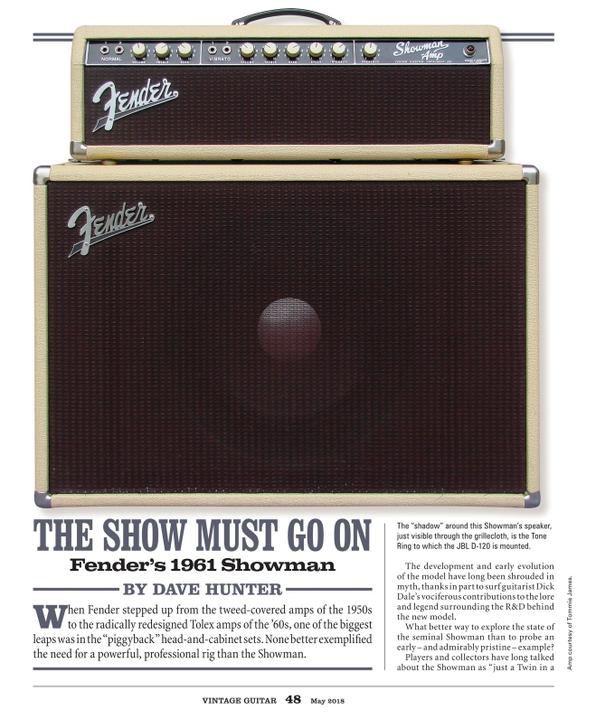 If you are looking for amazing quality cables for live performance and recording you need to look no further. These cables are fantastic. Copper grading, gold plated, with a variety of sizes and angles for all your cable needs. I know they're just cables, but I can't say enough good things about them. I discovered them on Scott Grove's Youtube channel and I was hooked. I Redid my entire rig in nothing but cables from South Creek Audio .

Check out his review: https://www.youtube.com/watch?v=9lt5vzaA_Kg

They do nothing but cables and are not paying me a dime. I can't see myself using anything besides them for the rest of my guitar life. 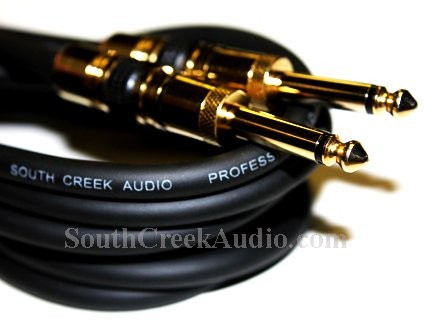 If you or anyone you know would like to own the Fender De Ville amp that I've been playing through over the past ten years or so, please see this post in the "for sale" section.

Bob Shade of Hallmark Guitars was kind enough to send me three Hallmark guitars for distribution here on the west coast. I have a Custom 60 Gospel in white with white pickup covers. I also have a black Gospel with white pickup covers, (stunning) and finally a Hallmark II in 3 tone sunburst. If you have any interest these beauties, contact me. I can also send detail pictures on request.

Please check out www.sinuousguitars.com to see guitars I build that make great surf rock guitars.  I will also gladly give artist discounts.

If anyone has some input on what they would like to see in a modern surf guitar I would love to hear it.

The Von Drat joins Sparrow’s Rat Rod and Twangmaster as available in the premium “Continental” line. Made in Vancouver, BC Canada, the Von Drat surf guitar features Burns Tri-Sonic pickups, Grover tuners, bone nut and Wilkinson tremolo. With an alder body, maple neck and rosewood fingerboard, the Von Drat is a 21-fret, 12” radius, 25 ½” scale length guitar with the volume and tone top-hat knobs and three-way selector switch located at the lower bout for versatility and playability. The Von Drat is currently available in Tudor Black and Avocado Green, with custom pickguard.

The guitar is the namesake of Toronto, Canada-based surf outfit The Von Drats. The Von Drats were hired by Sparrow Guitars to play an event as part of the 2008 MIAC Show in Toronto, Canada and became instant favourites of Sparrow staff. From that meeting, Sparrow President Billy Bones began planning and designing what would become Sparrow’s Von Drat guitar. Steve and Dave Von Drat were in attendance at the 2009 NAMM Show to debut the guitar at the Sparrow booth and play original material and surf-standards and the band will take their Von Drat guitars on the road and in the studio.

Forty Years Of The Fender Stratocaster

Submitted by Ron-Rhoades on August 18, 2008
Last night at our show at The Sheraton Kauai Resort a guy and his daughter come wandering up to us and he asks "do you guys know Mr. Moto?" Yeah, we sure do...wanna hear it? and he nods yes and so we busted in to Mr. Moto which brought a huge smile to his face as he sat on the steps leading up to the restaurant where we play outside near the beach in Poipu. He sat and listened for the whole set and when we took our break he came up to me and started asking questions about surf music, my unusual guitar, and equipment and stuff like that and then mentioned that he used to play with Dick Dale back in the 80's. I'm like wow, you played with Dick Dale? and we started talking about DD having cancer and i told him we invited him to sit in with us when he comes to Hawaii after all his medical stuff is finished next year and he started reminiscing about playing with DD and surf music and equipment in general.