For the 9th year in a row, the global Surf guitar community will focus its attention on its Southern California birthplace as the Surf Guitar 101 Convention takes over Alpine Village on Saturday, August 13, 2016. What began as a fairly intimate gathering of die-hard enthusiasts and members of the Internet's number one resource for all things Surf guitar, surfguitar101.com, has blossomed into the most important event of its kind in the USA.

The 12 hour affair, which runs from Noon to Midnight, will feature one of the greatest lineups of modern Surf instrumental bands from around the globe. This year’s performers include Crazy Aces from Nashville, TN; The Secret Samurai from San Diego, CA; Kelp from Santa Barbara, CA; Tikiyaki 5-0 from Los Angeles, CA; George Tomsco of the legendary group The Fireballs from New Mexico; a historic reunion of the Northern California supergroup The Mach IV and the reunion and 20th anniversary celebration of Washington D.C.'s highly influential Space Cossacks. Representing the international contingent will be the return of Italy's Bradipos IV, the highly anticipated appearance of Russia's masters of horror-Surf, The Messer Chups and the American debut of Dutch trailblazers The Phantom Four, featuring not only Phantom Frank from the legendary Treble Spankers, but very special guest guitarist John Blair, Surf music historian and revival pioneer of Jon & The Nightriders.

In addition to the 10 main performances, there will be an extended live set of music featuring some extremely special guests from the original 60's era bands, an all-star tribute to The Original Surfaris, an exclusive performance by local favorites The Hot Rod Trio demonstrating products by Nocturne, and a generous all-day raffle of sponsorship products that includes prizes ranging from CDs, DVDs, T-Shirts, guitar pedals by Nocturne, guitar and bass accessories from D'Addario, an amplifier by Quilter, a guitar and bass from Fender and a very special exclusive Eastwood Senn Model One guitar!

Alpine Village, the expansive new all-ages venue for the convention, features top-notch international cuisine and beverages, a deli and marketplace, ample parking and spacious areas where vendors from some of the leading Surf instrumental record companies and collectible dealers will gather to sell their wares. 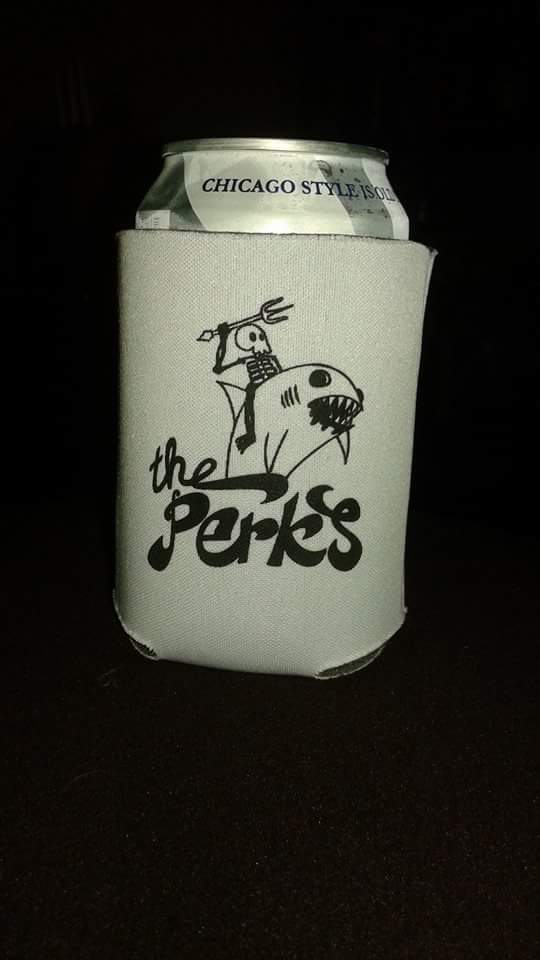 Submitted by mmorgan_Katatonics on July 28, 2016 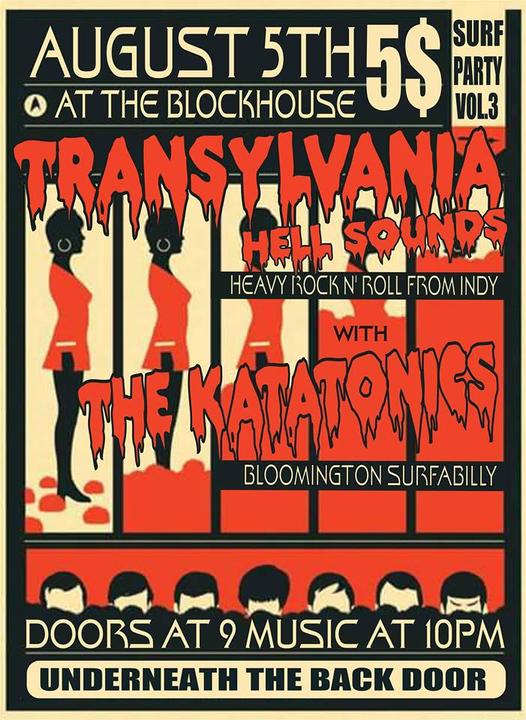 Our new EP "Surf'n'Goat" is available for streaming at Bandcamp.
CHECK IT OUT!!!
Buy your copy on drunkabilly.com 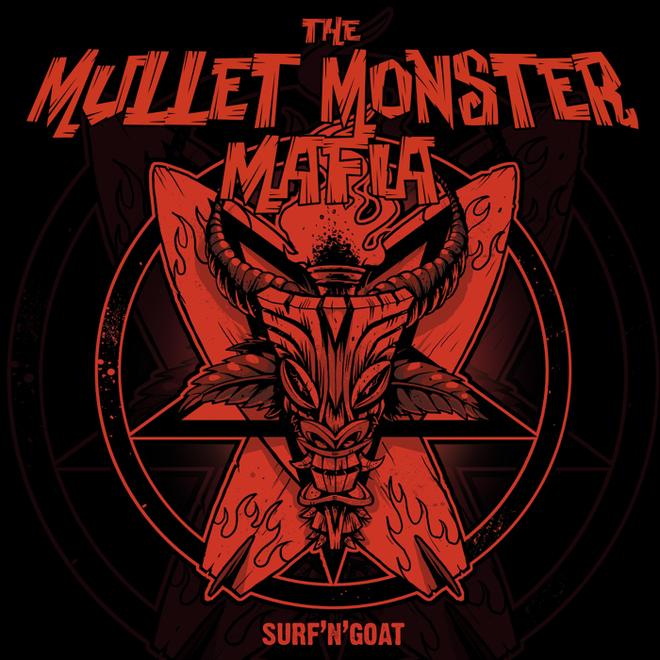 Makahiki: A Night of Tiki, Indianapolis, Sat. 9/17 w/ The Concussions, The Tikinauts and more

Once again you hear the call of the Makahiki: A Night of Tiki. Come away and join us September 17th 2016 in Indianapolis, Indiana for a tiki filled evening of music, tropical libations, and entertainment. This year we will feature classic surf by The Concussions, DJ Johnny Yuma spinning exotica, The Tikinauts from Milwaukee, burlesque by Rocket Doll Revue, the exotic sounds of Roland Remington, and traditional Hawaiian by the Hoosier Haoles. Your paradise awaits at the Makahiki! 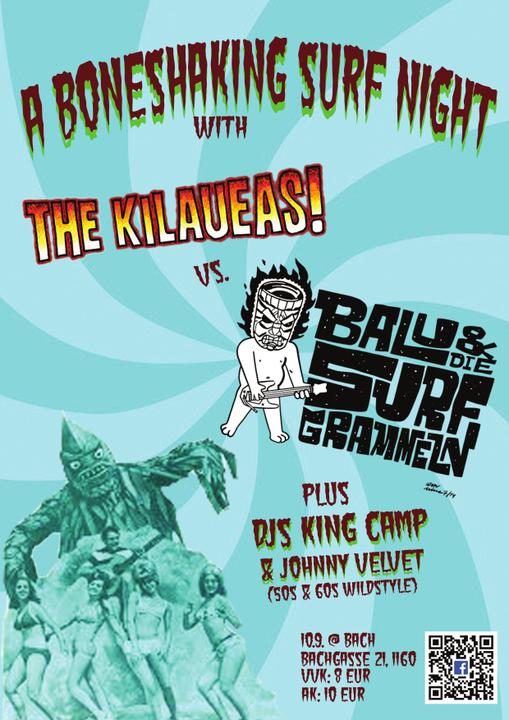 Just for those who are in the vicinity of Austria, or if you are planning a trip in September - Balu & die Surfgrammeln will have a show with The Kilaueas on September 10. 2016 in Vienna at dasBACH; Bachgasse 21, 1160 Vienna. Cover is 10 €, and we'll have a free after-show party

Surf/Tiki Anniversary Party with the Royal Aces in Denver, July 23

The very cool Green Russell bar, 1422 Larimer St. in Denver, is having it's surf/tiki themed anniversary party on July 23. The Royal Aces will provide the reverb and twang from 8 to midnight, and the event is completely open to the public. 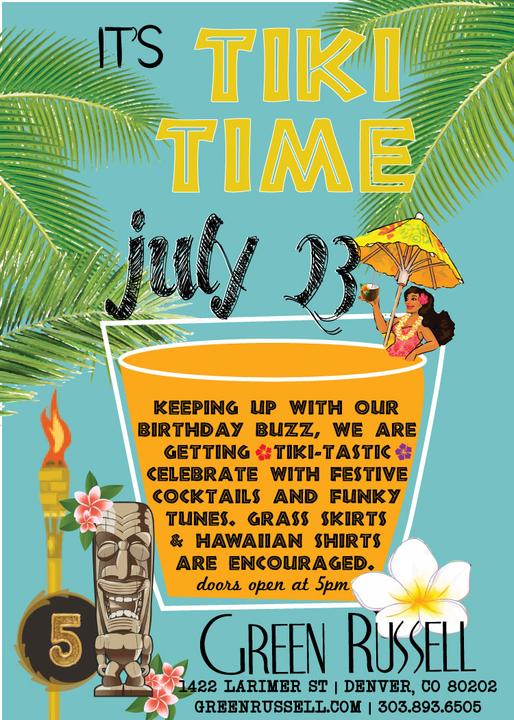 Orlando's newest Surf Instro-combo will be playing the Village House in Oviedo, Florida this Friday. Out on the patio, what a better way to unwind after a work week? 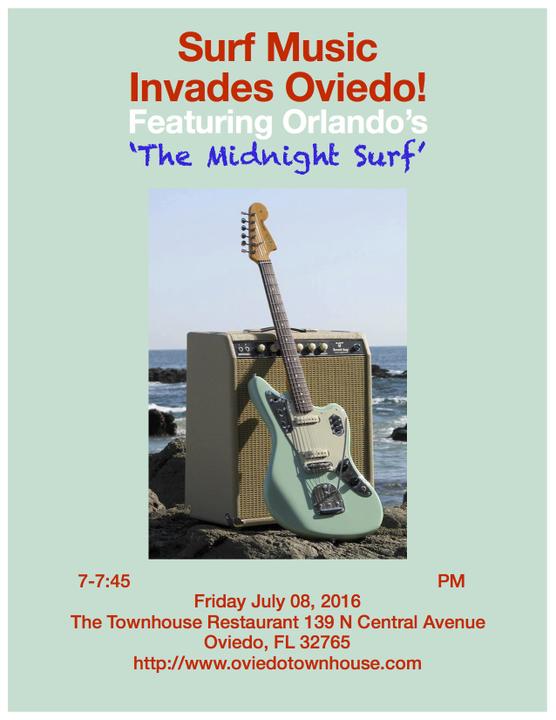 The Tremolo Beer Gut is about to tour Brazil and release an exclusive double b-sided 7'', with the tracks "Caipirinha River Cruise" and their take on Jorge Ben's "A Minha Menina".

They will play in Rio at the Danish Pavillion, at Ipanema Beach, as well as a few more dates in Rio, São Paulo, Piracicaba and Campinas.

The EP will be released by Reverb Brasil Records, Crunchy Frog Records and Esta Noite Encarnarei no Teu Compacto.

You can listen and pre-order it at Reverb Brasil Bandcamp.

The Finale Party of the three day Tiki Kon festival in Portland Oregon will feature The Insanitizers surf guitar band. Performance is from 6 to 7pm. It is free, and no ticket or pass is needed (this is a change). The band will perform several songs from their upcoming new 22-song CD "Guitar Fun" including national award winner "Shootout" (Best Instrumental, July 2015, The Akademia).

The band was invited on the spot when the Tiki Kon organizer saw them perform in January. Come and hear why, and how energizing the music of 69 year old guitarists can be. 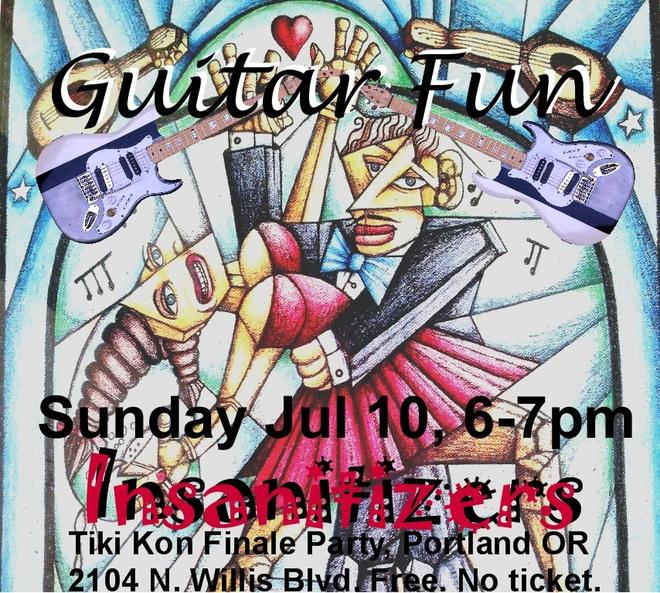