MYCROFT ELOI (guitar), LAZARUS LONGFELLOW (guitar), SKYLES ANGSTROM (bass) and GROMMET X (drums) have concocted, crafted and cut thirteen new tracks of ultra-melodic, hyper-effervescent, non-stop Surf/Instro Rock which capture the exhilarating, cosmos-trotting experience of barnstorming at breakneck speed throughout time, from 1963 to 3063 and back again without a breath between.

From the baroque Venusian cloudburst of PARSEC’S PARADOX to the contemplative sturm-und-twang of MERCURY IN RETROGRADE, the Saturnalian secret agent trill-and-chill of THE MAN WHO COULDN’T TELL TIME and the bittersweet Neptunian summer’s-end melancholia of CIRCADIA , The TomorrowMen bring it kicking, spinning and reverbing on home to the adventurous 21st Century time traveller. So pack a bag, slip into your all-weather see-thru chromium and vinyl spacesuit and hop onto the big, big Stereo Spaceship for a timeless, time-wide trip into the ear-splendiferous sound of The TomorrowMen’s FUTOURISM.

In the primitive era that is the 21st Century, when hot, sweet, foot-stompin’ music is reduced to little more than a streaming bit of flotsam, The TomorrowMen are here to bring you hope from the year 3000 in the shape of a special, hand-made, limited edition box version of FUTOURISM, complete with a genuine Compact Disc and an extra-genuine selection of Postcard Art from the future, along with a download code so you can put FUTOURISM right onto your phone or similar digital turntable, allowing you to share the CD with a Luddite friend, or vice-versa. Hand-made box edition limited to 500 copies.

The Surf Guitar 101 2015 Convention will have t-shirts! A Denver based company called ilaughoutloud is bringing a limited number of these, so be sure to purchase early. Shirts are available in a range of adult shirt sizes and will be $20 each. Proceeds of shirt sales help fund the convention! Contact GINNY at imagesinthewind@gmail.com to pre-order and pre-pay with PayPal to be sure your size is available. While supplies last, shirts will be made available three days: Friday night a the Purple Orchid, Saturday at the Convention, and Sunday at the HB Pier Surf show. Pre-order or contact Ginny to let her know you're interested so she can bring enough!

NSSR is very pleased to announce the addition of the very first female DJ to North Sea Surf Radio. Starting July 18th DJ Mz. Siren will be presenting her weekly show "Surf Shot" which will be broadcast every Saturday at 21:00 CET, after Django Deadman's "Hangnine FM". "Green Cookie Beach" will move one hour back to 22:00 CET.

Mz Siren's time is split between a small fishing town called Hastings on the South East coast of England and her secret lab drifting in space from where she broadcasts Surf Shot. She is the bass player in The Sine Waves and Thee Jezebels.

She also co-promotes The Fratcave with her partner Project X from The Sine Waves, they try to ensure visiting European surf and garage bands stop off at Hastings and entertain the locals at their monthly shindig. 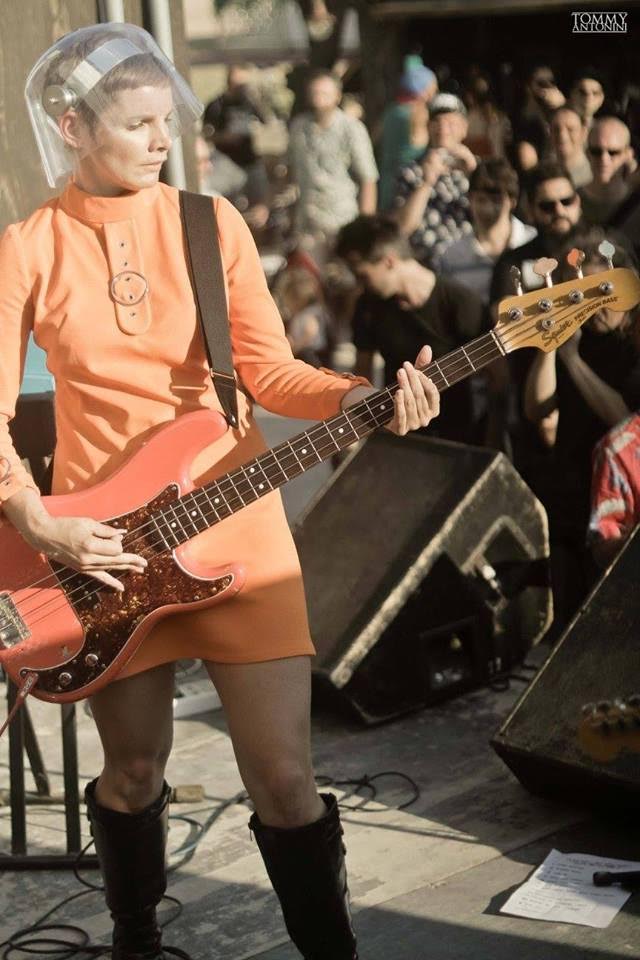 We are pleased to announce that the 8th Annual SurfGuitar101 Convention will be taking place on Saturday, August 8th, 9am to 8pm, at the Garden Grove Elks Lodge in Garden Grove, California! Please note the venue change this year!

Once again we have assembled an amazing lineup and have continued our tradition of hosting international bands. This year we have the incredible King of Fuzz Guitar, Davie Allan, celebrating the 50th year of his musical career! We have two bands from Spain: The Longboards and Els A-phonics (who knocked them dead at the Surfer Joe Festival in June). Also on the bill are California legends The Eliminators, the young and brash traditionalists The Volcanics, and the new hotrod surf band Boss Fink (featuring members of The Ghastly Ones and the Huntington Cads). Hailing from Atlanta, Georgia we have the progressive instrumental band Moonbase. From a time and place unknown we have the sci-fi stylings of The TomorrowMen. And it wouldn’t be a true surf guitar convention without the legendary Paul “Mr. Moto” Johnson of the groundbreaking 60’s band The Belairs. Finally we have an all-star tribute to Jim Messina and The Jesters featuring John Blair (Jon & The Nightriders) and Ivan Pongracic (The Space Cossacks, The Madeira).

Also new this year will be a live broadcast and stream courtesy of KFJC and Cousin Mary! KFJC will be broadcasting on 89.7 FM in the Los Altos Hills area as well as streaming audio and video on the ‘net at kfjc.org!

Be sure to get there early for the SG101 members jam (see the links below to sign up).

Once again here is the lineup followed by the venue details:

Doors open at 9am, music begins at 10am and runs to 8pm. Cost is $30 at the door. The Elks Lodge is an all-ages, family friendly venue that will have food and beverage available all day!

In addition to the music we’ll have vendors selling surf music and surf related items. Check out these raffle items thanks to our generous sponsors:

As usual there will be plenty of amazing shows before and after the convention, including a convention after party and a Huntington Beach pier show the following day.

Check out this sneak preview, world premier release, "Jennette's Pier" from the soon-to-be-released CD, "Tres Gatos Suave" from The Turbosonics!

Submitted by Double-Crown-Records on July 05, 2015 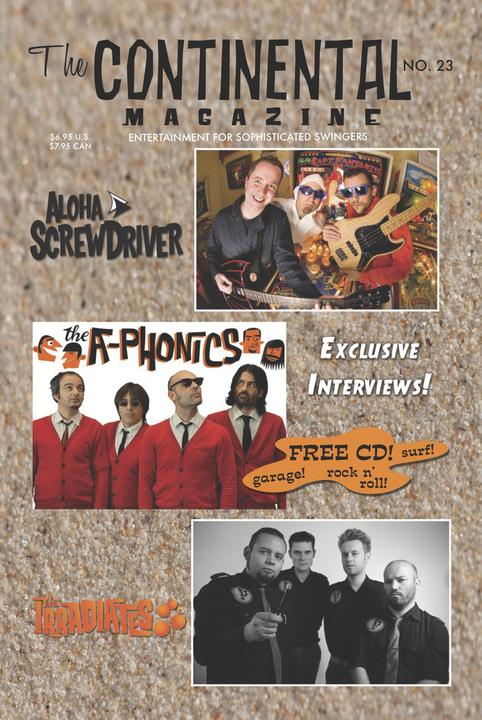 Issue #23 is available now, featuring another full-color cover designed by Jonpaul Balak! In this issue we include exclusive interviews with some bright new faces on the surf/instro scene: Aloha Screwdriver, Els A-Phonics and The Irradiates. All three bands have released outstanding new discs in the last year or so, and amazed and astounded instro fiends all over the world. We also ask some of your favorite surf/garage rock stars what their favorite non-surf/garage rock discs are, plus there's tons of music and DVD reviews, including more vinyl reviews than ever before. You also get a free 20-song CD filled with lots of great surf, instro and garage rock tunes. 40 pages in all, with a full color glossy cover.

Frankie Blandino's "The Fathoms" is the featured guest at the 2nd Annual Asbury Park Surf Music Festival at Asbury Park, NJ (USA) on July 11, 2015.  Current iteration of the band is Frankie Blandino (guitar/vocals), Robbie Amaral (Guitar), Steve McCrossan (Bass/vocals) and Neil Curran (drums/vocals). They'll be doing a ton of "Fathoms' music such as "Getaway Car", "Fathom This", "Shadow of a Doubt", "Fathomless", "Overboard". We are psyched to be invited and looking forward to it! See FB Page for the event.

Luau or Die at the Canadian Pinball Championships

Luau or Die wil be playing at the Canadian Pinball Championships on Friday 3rd July at 10pm EST until around 2am.  There are two sets, and thanks to Derk Brigante, www.surfrockradio.com will be broadcasting the event live on the internet.  That means you will be able to tune in and hear an aweseome band play live, accompanied by the sound of pinball in the background, and a hopefully a lot of surf tunes in between courtesy of Derk's DJ set.