Submitted by PhantomOperators on February 26, 2015

On Tuesday March 10th, the Phantom Operators will launch "V2 Tuesday", in which they will donate 100 percent of their LP sales on PhantomOperators.bandcamp.com towards the V2 indiegogo campaign. You can follow on social media thru the hashtags #vivav2 and #V2Tuesday!

Submitted by PhantomOperators on February 26, 2015

The Phantom Operators will be releasing some all new material this spring in conjunction with a new podcast called "Mortis". "Mortis" will center on "All things left of center". The Operators are contributing theme and incidental music that will be used on this podcast. The soundtrack will be released some time in April and will only be available to listeners of the podcast and followers on social media. (Facebook, Twitter, and their own site Mortis.TV). These songs will have a little darker edge than the tunes on their debut LP, "Metal Mariachi Music" (Think Joy Divivsion covered by the Ventures!) The Operators are excited to be a part of this podcast and have really enjoyed making music for it. For more info, You can go to Facebook.com.MortisMedia or follow on Twitter @mortistweets.

As mentioned previously in this story, the Indiegogo campaign to fund the first V2 album is now underway. Please check out the campaign by clicking the image below:

THE COCONAUTS SET TO OPEN FOR THE BEACH BOYS March 28

Submitted by TheCoconauts on February 18, 2015

We are excited to announce that we will be opening for The Beach Boys at The Good Life Festival in San Tan Valley on March 28th! We are thrilled to have been invited to play this show!

We are also currently working on our follow up to 2013's Drove My Car to Heaven E.P. with our next album. It should be ready by the show. Thanks for the continued support!!!!

Submitted by PhantomOperators on February 17, 2015

The Phantom Operators' first full length LP "Metal Mariachi Music" is available for download at PhantomOperators.Bandcamp.com! In addition to this new release, the band has also put together a compilation of all their releases, pre-"mariachi", along with two unreleased bonus tracks, called "8 Singles and a Double", also available at PhantomOperators.bandcamp.com! The downloads are free, and the band invites everyone to check them out!

Submitted by surferjoemusic on February 17, 2015

Ladies and gentlemen, this is the official poster of the Surfer Joe Summer Festival 2015.

The designer STEVE NAZAR has come to surf music after our request for the very fist time. His graphic style has become legendary with Town&Country Surf Design in the late 80s. He's THE man, his style has been imitated everywhere as a symbol of wild, cool & sporty. His characters has been replicated in walls all over the planet.

He realised 2 fantastic custom designs for us. One of the two is this one. The other, still a surprise, will be soon available with our merchandise for the festival.

The posters will be available at the festival in A3 format, glossy heavy paper 300gr. You can reserve one if you like, just write us asap at info@surferjoemusic.com. The cost of the poster is 5 euros. Bring your marker and get your copy signed by all artists! 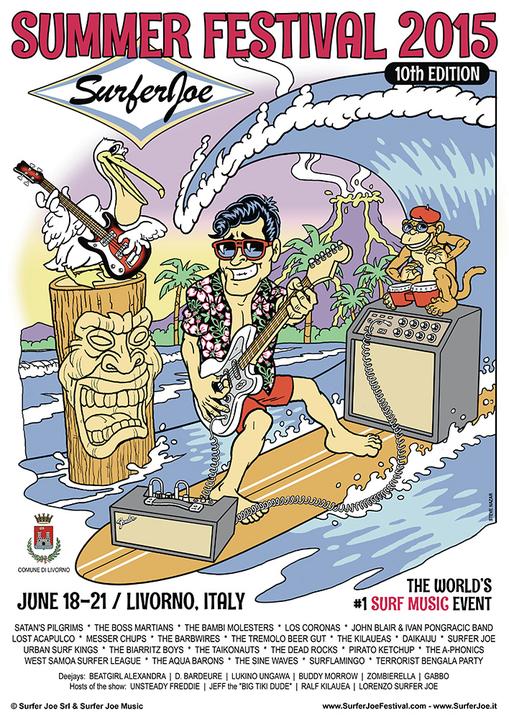 Members of The Ventures launch V2!

Submitted by LukeGriffin on February 16, 2015

Instrumental band V2—featuring members of The Ventures, Bob Spalding and Leon Taylor—is kicking off a crowdfunding campaign on Indiegogo on February 23rd to raise funds towards producing a debut album and  to introduce itself to a worldwide fan base.

The album will feature a balanced mix of classic instrumentals as well as new compositions. Featured guest artists on the album will include Eric Johnson (Out Of Limits, Pipeline), Adrian Belew (Telstar), and George Tomsco (Bulldog).

Tracking for the album will begin in May 2015 under the direction of Grammy-nominated producer, Chris “Frenchie” Smith.

Perk offerings at various levels will include: Limited vinyl release; V2 limited edition Couch guitar strap (created only for the campaign and for featured musical guests); concert tickets; signed and numbered color print; private guitar lesson with Bob Spalding. There will also be limited perks such as picking a classic instrumental for V2 to record for the crowdfunded edition on the album (limit 3) and an Executive Producer credit (limit 4).

The campaign will run for 4 weeks and will be tracked as #VivaV2.

V2 is an instrumental rock band launched in 2014 by Bob Spalding and Leon Taylor, members of the iconic band, The Ventures. V2 is dedicated to preserving and advancing the “art” of the rock instrumental by performing high-energy concerts and releasing the best possible recordings.

Last Saturday, Feb7, was my band's first show in NYC in 5 years. We are called B11 - a strictly instrumental three piece from Boston. I got the whole thing with my GoPro, the gig was super fun, HEAR for yourself:

Unsteady Freddie got 2 videos too: