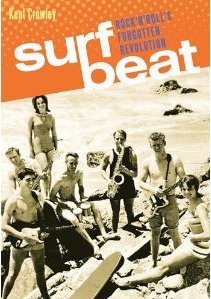 For our second give-away in February to celebrate six years of SG101, we have up for grabs a copy of Kent Crowley's Surf Beat: Rock'N'Roll's Forgotten Revolution. From the publisher:

Surf Beat is the first book to tell the story of the birth of surf music, and its persistent survival and reinvention in the face of decades of dismissal as a mere cultural aberration. Conventional wisdom posits the notion that rock 'n' roll languished in the period between 1959 and 1963. Yet in that four-year stretch between Elvis joining the army and Buddy Holly's death, and the emergence of the Beatles, a musical revolution took place in Southern California that would influence all electric guitar forms that followed it. They called it surf music, and in Surf Beat, it finally gets its day in the sun. Surf music authority and author Kent Crowley uncovers the story of the initial emergence of surf music as first a local, then a national and international phenomenon, and its subsequent waves of popularity through the ensuing decades.