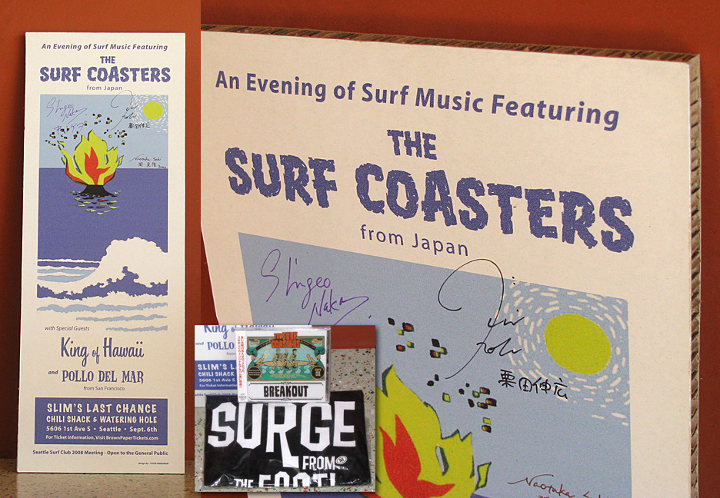 For our final giveaway in February (celebrating SurfGuitar101's sixth anniversary), we have up for grabs an awesome Surf Coasters swag package featuring a signed poster, t-shirt, and CD.

This deluxe Surf Coasters Package features items that even the most ardent fan might not have. The show poster is from the September 6, 2008 Surf Coasters show at Slim's Last Chance in Seattle. Designed by Todd Hardman and measures 8 1/2 x 23" and is printed on heavy, corrugated cardboard that measures 1/2" thick. The poster is signed by Shigeo Naka, Nobuhiro Kurita and Naotaka Seki. The "Surge from the East" T-Shirt is from their first US tour in 2004, still sealed in its Japanese package. Finally, a still sealed Japanese version of The Surf Coasters "Breakout" CD, it has a different song order and a few tracks that aren't available on the US version. Bidding will start at $100. What? It's free??? That's crazy!