The Deadlies Go to Nashville 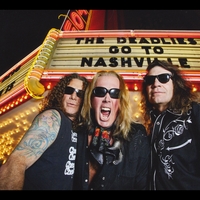 Well lookee here! James from The Deadlies has graciously donated a brand new copy of the new CD The Deadlies Go to Nashville for one lucky SG101'er! So what are you waiting for? Mash that button below to enter!

The Deadlies are entirely new type of surf band, paying homage to the Ventures Dick Dale and the Chantays as well as the California Honky-tonk sound of Buck Owens and Dwight Yoakam while keeping an under lying presence of the California surf punk scene that brought us the Dickies, Agent Orange and Top Jimmy and the Rhythm Pigs. The Deadlies have three CD's "Meet the Deadlies", "A Very Deadlies Christmas" and the newly released "the Deadlies Go To Nashville" that are available at iTunes and Amazon and all the usual locations. They have two TV shows, The Deadlies are the house "Cave Band" on "Creepy KOFY Movietime" with Balrok and No Name which airs every Saturday Night at Eleven on KOFY TV 20 in San Francisco, they are also the House Band on the Car Czar which airs Sunday Mornings on KMAX in Sacramento... and appear frequently on Retro Night on the ABC affiliate KOFY TV-20 cable channel 13. They are the "house band" at Six Flags Discovery Kingdom in Vallejo, CA. They have performed for the W hotel chain, the various County Fairs, Six Flags Magic Mountain, Sacramento International Airport (as guests of the TSA) and other larger venues in California and Nevada. They've also appeared on the "Rachael Ray Show" and "Eye On the Bay" and soon to appear on the Discovery Channel's "King of Kustoms". They're music has been featured on Live 105, 107.7FM the Bone (San Francisco), 99.3FM KVYN (Napa), 810AM KGO (San Francisco) and Radio Free Bakersfield.